According to history and over 3000 years ago, Magnetite Fe3O4, the oldest known magnetic material, was considered a substance of wonder. Chinese, Greeks and Turks were fascinated by how their iron ornaments, tools and weapons were attracted to stones. Folklore tells that if one explored and played around with these tools enough, then the magic material could send out charms to make other stuff magnetic too. Animist Thales (636-546 BC) believed that the lodestone possesses a soul. Legends of Pliny the Elder, tell us of Magnes, a shepherd who lived in Magnesia (present Greece). One fateful afternoon, this fatigued shepherd stopped to rest while sheep grazed. When he woke up several hours later, he could not see his sheep in the grasslands. A poor soul tried to help pick him up off the ground, but the iron staff and his shoes were glued to the rock. “Some witch might have stolen the sheep”, thought Magnes and he ran off frightened, without his staff and slippers.

Later on, the rock which was named Lodestone came into discovery. Mariners’ compass was called Lodestone meaning “waystone,” because it showed the “Right Way” to many in distress, which is historically a GPS, discovered in 1175 AD. The Chinese developed this compass based on a magnetized iron needle which points north when freely suspended some 2500 years ago [1], which later was used by famous English scholar Alexander Neckam in 1187. In 1282, Al-Ashraf, a Yemeni physicist and astronomer defined magnetic properties of known materials and measured compass applicability [2]. William Gilbert, an English physician of 17th century, predicted Earth to have magnetic field of its own, with north and south poles. Later in 1821, Hans Oersted, Danish Physicist, discovered magnetism in compass needle tilting when current flowed through the wire in the vicinity [1]. Ampere in 1827, indicated that electric currents give rise to magnetism in a material, wrapping itself in force fields termed as magnetic fields.  In the 1830s Faraday proposed magnetic induction in current carrying solenoids [1]. James Maxwell shared his acumen known as Maxwell’s equations, defining the basics of electromagnetism. Einstein in early 20th century gave Special Theory of Relativity, validating electromagnetism in all frames of reference [3].

But what is magnetism and magnets? Magnetism is a force of attraction or repulsion experienced by a material (magnet) due to electron spins in specific atomic arrangement. On atomic scale, magnetism quantified by Magnetic Dipole Moment (m) is defined by unpaired electron spins (3d or 4f shell). and its orbital movement around nuclei. It’s also possible with electronic charges flow, i.e. through current carrying conductor. Revising Heisenberg’s Uncertainty Principle for opposite spins accommodation within electronic shells and Pauli’s Exclusion Principle for Electronic Configuration, electrons are arranged within sub shells in such a way that their magnetic moments cancel out, since subshells are filled and net orbital motion is zero. So, even if free electrons and unfilled subshells are present, their overall contribution due to randomness of magnetic moments is not significant [4]. But things can change altogether within an external field, giving direction to magnetic moments, producing a net effect of magnetism. Subnuclear magnetic moments are exponentially weaker than electronic magnetic moments, but find applications in MRI and NMR etc. Three major classes of materials are defined for their interactions in electromagnetic fields and net effect of magnetism, namely: Diamagnetism, Paramagnetism and Ferromagnetism. There are also three less common classes (Ferrimagnetism, Antiferromagnetism and Super Diamagnetism). Magnetic permeability (µ = B / H) is used to classify the type of magnetic material and strength of magnetism.

Simply put, if in an element’s magnetic moments diminish without external field and do not cooperate under an electromagnetic field, then this effect is labelled Diamagnetism (µ < 1) [5]. This effect is pronounced in Mercury, Gold, Copper, Water, Wood, most organic materials etc. If material demonstrates an attraction of moments in an external field but then loses it instantly in its absence, then it’s called Paramagnetism (µ = 1). Tantalum, Oxygen, Lithium, Aluminum, Uranium etc. are few example of paramagnets. Whereby, if aligned magnetic moments in Fe, Co, Ni, Nd-Fe-B, Sm-Co etc. are generating local field effect and collectively spontaneous magnetization without external field, the effect is Ferromagnetism (µ >1) [6]. Naturally, ferromagnets are classified as soft or hard magnets depending on their response after external field interactions. Soft magnets can easily become magnetized and are prone to demagnetization under low reverse fields. So their utility can be useful where the altering of state magnetization is necessary, like in power or electronic transformer cores, stator, rotors materials etc. On the contrary, hard magnets once magnetized require much larger reverse currents for demagnetization. Characteristics of hard magnets include very high values of Saturation Magnetization MS, Coercivity HCi and Maximum Energy Product (BHMax). There are vast applications of hard magnets including loudspeakers, hard disk drives, medical equipment, sensors/switches, generators, motors, holding magnets, toys, levitation tracks, fusion devices etc. [7].

And if you still have an interest after reading this already lengthy blog, this last part is about the basic parameters used in quantifying magnetism (I swear, the basic ones only). Regarding permanent magnets, the ferromagnetic superman is Nd-Fe-B. So when the external field H (A/m, Oersteds) is absent, the degree of magnetization B (magnetic flux density/induction) within permanent magnet is non zero due to individual magnetic dipole moments m from the grains [8]. Magnetization M (A/m, Oe) is a measure of magnetic moments per unit volume (M = µt / V). Small regions termed as domains can be spontaneously be magnetized till saturation. Ideally, these domains are separated by thin sections called domain walls across which orientation of domains are opposite without external field. Further increasing field induces saturation magnetization MS due to total coordination of atoms [9], domains align in direction parallel to fieldshown in Figure 1 (a). Henceforth, Total Magnetic Field or Induction (Tesla, Gauss) in SI Units is B = µo (H + M) = (µo H + J). Intensity of acquiring magnetization is called Instantaneous Magnetic Polarization J (Tesla) is represented as (J = µ M) and likely saturation polarization is written as JS = µ MS. Withholding a certain amount of magnetization is termed as Remanence Br (Tesla), illustrated in Figure 1 (b). With an applied field in opposite direction, to reduce magnetization to zero, driving force is coercivity HC (Oersteds), indicated in Figure 1 (c) [6-9]. We can see reverse current in negative external field causing reorientation of magnetic moments with net dipole cancellation such that induction goes to zero and Magnetic Flux (φ= B x A) is also zero. At (d), the increase in opposite current ensures external field strength H increasing linearly, causing complete alignment of magnetic domains, i.e. Inverse Saturation zone. Similarly, reverse current and field H returns to zero (e), so the magnetic moments are holding reverse alignment – Reverse Remanent Magnetization. Finally, at (f) we can see that B = 0 again and magnetic moments reorientation opposite to each other are same under applied field, so we have positive coercive zone Hc [4, 8, 9]. Characteristic loop between Magnetization B and external magnetic field H is known as Hysteresis, with loop thickness implying qualitatively, if the magnet is hard or soft. If we follow the orientation of magnetic moments with the field, we can infer that these moments change with increasing and decreasing coercive force. Inarguably it is the coercive force or large externally applied field that translates to reorientation of magnetic moments whereby remanent magnetization magnetic moments held together in absence of external coercive field [6, 9]. Particularly in permanent magnets having high remanent magnetization, we need to apply even higher coercive force field to alter the orientation of these magnetic moments and this long-lasting effect can be traced via Hysteresis Loop. 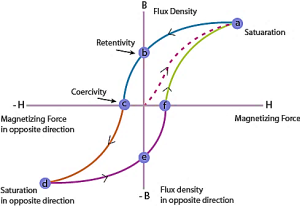