What are Rare Earth Elements, REEs?

The rare-earth elements (REEs) are a group of 17 elements (atomic numbers 57-71) that exhibit a range of unique electronic, optical and magnetic properties. Because of their similarities to the REEs, scandium (Sc) and yttrium (Y) are considered by most scientists to be REEs too [1]. 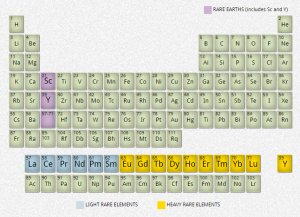 A common assumption made by many people is that there must be a small number of these elements on the planet. They are, in fact, quite abundant but just difficult to separate which makes heir presence on earth rare. Some rare earths are in fact more abundant than other better known elements. For example, there is more of the rare earth element neodymium than there is of gold. There are, however, many economic deposits of gold, but very few of neodymium. The term “rare earth” comes from their initial discovery in which only tiny portions of these minerals could be isolated from larger quantities of still more common elements. Another mistake is to believe that these elements are created from common earth, when in fact they are classified as metals.

How are Rare Earths used?

The global demand for rare earths has increased as more uses for these elements are found. Here are a few examples of how rare earth elements are being utilized in the world today [2].

Another mistake is to believe that these elements are created from common earth, when in fact they are classified as metals. 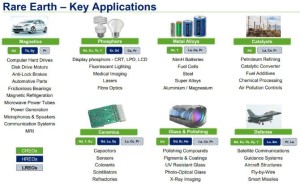 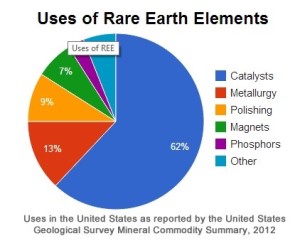 3. REE composition by end use: 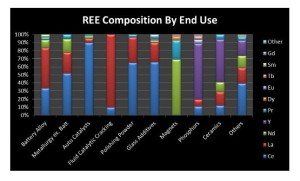 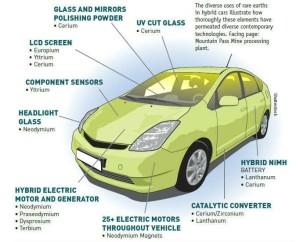 In the last 20 years the importance of rare earth elements has increased drastically due to three main factors:

Combined, these three factors have raised a growing level of concern that other rare earth mining sites need to be found outside of China, explored and brought online in short order [2]. 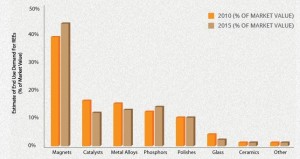 The U.S. Department of Energy is anticipating a critical shortage of 5 rare earth elements necessary for green technology development and construction. These REE are neodymium, europium, terbium, dysprosium and yttrium [3].

Already it’s believed that the United States and several other countries are beginning to stockpile their reserves of REE in anticipation of these anticipated shortages. 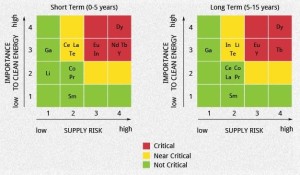 Why REEs are considered more valuable?

The prices vary widely with heavy rare earths historically commanding significantly higher prices than light rare earths. Several of these elements can reach extremely high prices depending on their scarcity and commercial applications. Europium, terbium and dysprosium have been recently priced in the range of $500 – $900/kg. While prices have dropped 70-95% from 2011 peaks, prices are still up over 130% from 2010 prices and heavies have maintained their value relative to lights. Lanthanum and cerium are nearing historic price levels.

Less expensive rare earths like lanthanum and cerium (although the prices of which are nearing historic price levels) are used extensively in modern technology, such as in the manufacturing of catalytic converters that automobiles require.

Many of the high tech devices enjoyed by the western world need rare earths to work. Consumer smartphones, TVs, batteries, computers, and medical equipment, even some of the critical components in nuclear reactors depend on rare earth elements for their operation.

This widespread need for REE in global manufacturing ensures a constant commercial desire for these metals for the foreseeable future.