A FAQ on rare earth elements and the challenges posed

Q2: Are Rare Earth Elements actually ‘rare’?
A2: They were thought to be when they were discovered in the late 18th century. However, it is hard to find them in concentrations that are economically viable to exploit and hence they are ‘rare’. The strict mining laws in European countries make these particularly valuable for Europe. Rare earth metals are particularly challenging to extract because they are often found together and it requires a lot of chemistry and metallurgy to separate them from each other and purify them. These mines also typically contain radioactive thorium, which has to be handled separately.

Q3. What are the most important properties of REEs?
A3: Magnetism, luminescence, and strength.
Source: http://pubs.usgs.gov/of/2011/1042/

Q4: Where are REE used?
A4: Their properties, notably as light-weight magnets, make them key to the ongoing miniaturization of electronics and the growth of green technologies. They are used in a wide range of products we use every day, including hard drives, earbud speakers, microphones in small gadgets, smartphones, flat-screen TVs, automotive application, motors, generators, etc. 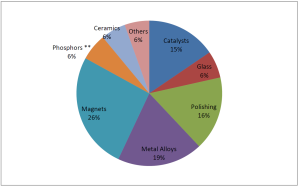 ** Phosphor is the luminescent material critical to many lighting applications, especially LEDs. Most white LEDs are in fact blue LEDs with a phosphor coating. Phosphor absorbs the light at the blue wavelength and reemits the photons at longer wavelengths.
Figure 1: Rare Earth demand by application 2015
Source: https://www.fas.org/sgp/crs/natsec/R41347.pdf Page 5

Q5: Which are top three nations with the most REE reserves in the world?
A5: Approximately half (55 million MT) of the world’s total reserves (130 million MT) is in China. The next biggest reserve of about 22 million MT is in Brazil. Australia stands third with 3.2 million MT of REE reserves.
Source: http://minerals.usgs.gov/minerals/pubs/commodity/rare_earths/mcs-2016-raree.pdf

Q7: Which are the most important ores of the REEs?
A7: Rare earths are relatively abundant in the Earth’s crust, but discovered minable concentrations are less common than for most other ores. World resources are contained primarily in bastnäsite and monazite.
Bastnäsite deposits in China and the United States constitute the largest percentage of the world’s rare earth economic resources, while monazite deposits in Australia, Brazil, China, India, Malaysia, South Africa, Sri Lanka, Thailand, and the United States constitute the second largest segment.
Source: http://minerals.usgs.gov/minerals/pubs/commodity/rare_earths/mcs-2012-raree.pdf

Q8: What and where are the various rare-earth mineral resources located around the world?
A8: As on November 19, 2015, currently there are 58 rare-earth mineral resources, associated with 53 advanced rare-earth projects, 49 companies and located in 35 regions within 16 countries. The complete list of these resources and projects can be accessed in the following webpage (TMR Advanced Rare-Earth Projects Index): http://www.techmetalsresearch.com/metrics-indices/tmr-advanced-rare-earth-projects-index/

Q9: What has been the price trend of REE for the past few years?
A9: The prices of REE fluctuated a lot during the REE crisis in 2010 (see Q10) but after that they are quite stable. Below we can see the price history of REEs and we can also observe their comparison with gold and silver. 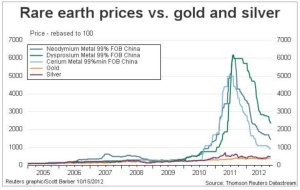 Q10: What was the REE Crisis of 2010?
A10: In 2010, China changed its approach to the rare earth market, and introduced production quotas, export quotas and export taxes, enforced environmental legislation, and granted no new rare earth mining licenses. Furthermore, China stated that they will no longer export rare earth-finished products, because of rapid growth of internal markets and limited reserves, especially the heavy rare earths (Gd through Lu). As a result, the price for rare earth materials and products containing rare earths has risen to a level at which the ROW mining companies and producers can be competitive and make a profit.
Source: http://www.sigmaaldrich.com/technical-documents/articles/material-matters/the-rare-earth-crisis.html

Q12: What is the Mountain Pass Mine and why is it so important?
A12: The Mountain Pass Rare Earth Mine is an open-pit mine of rare earth elements (REEs) on the south flank of the Clark Mountain Range, just north of the unincorporated community of Mountain Pass, California, United States. The Mountain Pass mine dominated worldwide REE production from the 1960s to the 1980s (USGS). The Mountain Pass deposit is in a 1.4 billion year old Precambrian carbonatite intruded into gneiss, and contains 8% to 12% rare earth oxides, mostly contained in the mineral bastnäsite.
The Mountain Pass deposit was discovered by a uranium prospector in 1949. Production expanded greatly in the 1960s, to supply demand for europium used in color television screens.
The mine closed in 2002, in response to both environmental restrictions and lower prices for REEs. The mine has been mostly inactive since 2002, though processing of previously mined ore continues at the site.
The mine is owned by Molycorp Minerals LLC, which is a subsidiary of Molycorp Inc.. Molycorp planned to invest $500 million to reopen and expand the mine. The money was raised through an initial public offering of stock in Molycorp Inc. Full mining operations were planned to resume by the second half of 2011 as a result of increased demand for rare earth metals. In December 2010, Molycorp announced that it had secured all the environmental permits needed to begin construction of a new ore processing plant at the mine; construction would begin in January 2011, and was expected to be completed by the end of 2012. The company announced its resumption of operations on a start-up basis at the Mountain Pass mine on August 27, 2012. As of 2015, the plant was in full production. Molycorp filed for bankruptcy in June 2015. In August 2015, it was reported that the mines was to be shutdown. Known remaining reserves were estimated to exceed 20 million tons of ore as of 2008.
Source: https://en.wikipedia.org/wiki/Mountain_Pass_rare_earth_mine

Q13: What are the environmental aspects of rare earth mining?
A13: The main environmental risk in rare earth mining are the huge amounts of tailings, which are a toxic waste being stored in artificial ponds surrounded by the tailing dam. A dam failure as it happened in Hungary in 2010 to the tailings from an alumina factory leads to destructive site specific emissions such as thorium, uranium, heavy metals, acids and fluorides. Furthermore, most rare earth deposits contain radioactive materials which impose the risk of radioactive dust and water emissions.
China, which is the largest producer of REEs, intends to reduce the environmental harm in the coming years by installing environmental technologies in the large mines and by reducing the numerous small illegal mines. China also aims at higher efficiencies in mining and processing and is running some research projects on a sustainable rare earth economy.
Risks of rare earth mining without or with insufficient environmental protection systems 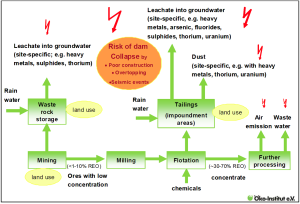 Q14: What else is interesting about REE?
A14: Scandium (Sc) is more abundant in the Moon than on Earth.
Samarium (Sm) chloride taken internally in the proper quantity will combine with alcohol and keep you from becoming drunk
Europium (Eu) is used in anti-counterfeiting fluorescent phosphors in Euro banknotes
Ytterbium (Yb) lasers are used to drill into diamonds to remove imperfections.
Lutetium (Atomic Number 71) is named after Lutetia where it was first found, the city that later became Paris.
Source: www.REEHandbook.com