The function of permanent magnets in some industrial devices

Here we will describe the operational functions of permanent magnets in some devices:

Electric motors are electrical machines that use electrical energy to produce mechanical energy. Electric motors contain two essential parts, a fixed stator which is usually a permanent magnet and inside the stator there is a rotor which is usually an electromagnetic coil. When applying electricity in the coil, it produces magnetic field which reacts with the magnetic field produced from the permanent magnet stator. This causes the production of mechanical energy in the form of rotating the electromagnetic coil. This mechanical energy is used to move cars, rotate fans, fly drones and so on. For more information about electric motors, please review the blogs for Amit Jha. 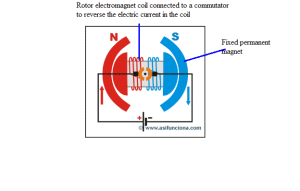 A simplified diagram of an electric motor1

Loudspeaker is another device that converts electrical energy to mechanical energy. The permanent magnet in the loudspeaker is fixed close to a mobile electromagnet coil. The electromagnet is attached to a flexible material called cone (diaphragm).  Passing an electric current in the electromagnet causes it to vibrate due to the interaction with the permanent magnet. The cone amplifies these vibrations to produce sound waves. The frequency of vibration controls the pitch of the sound, while the amplitude controls the volume produced. Microphones use the same set as loudspeakers in reverse mechanism to convert sound waves to electrical signal. 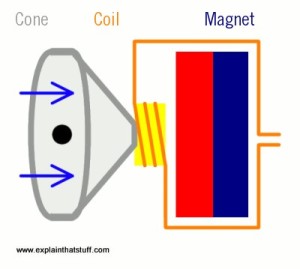 A simplified diagram of loudspeaker components2

Hard disk drives (HDDs) use magnetic storage mechanism in order to write and store information on a magnetic coated disk called platter (the mechanism of reading and writing is fascinating, go and read about it3). Usually there are three permanent magnets in a HDD. A fixed permanent magnet in the actuator, which moves the read-write arm by the interaction with an electromagnet (electricity to mechanical energy), a small magnet at the end of the read-write arm, which is responsible for the reading-writing actions with the platter and a third permanent magnet in the spindle motor to allow the platter to rotate at high speed. 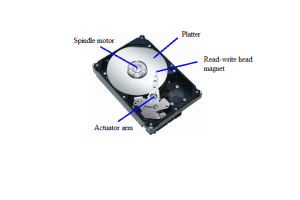 A simplified diagram of an electric generator4

A cathode ray tube (CRT) is a vacuum tube that use electron gun (s) to create images on a phosphorescent screen, by the interaction of electrons beam with the screen. Various magnets are used in the CRT to bend and focus the electron beam. CRT is used in many applications as in oscilloscopes, radar targets and televisions.

The function of permanent magnets in different appliances and instruments can be easily manipulated depending on the application in use. This permits them to be used in unlimited number of products as in mobiles, televisions, laundry machines, microwave, cars, synchrotrons, wind turbines and so on.  And any simple idea can permit the use of permanent magnets in new set of applications, go and check some videos for mind blowing uses of magnets and magnetism.