Don't Miss
Home / Blog / SmCo magnets: What is the role?

SmCo magnets: What is the role?

Electric automobiles make up the biggest part of industrial applications for permanent magnets. When one speaks about permanent magnets in electric vehicles, one should picture a very strong magnet based on NdFeB or SmCo alloy (Figure 1). Their strength allows for the miniaturization of electronic devices as we know today. But it is important to underline that 95-98% of magnets in electric car industry are nowadays associated with Nd, rather than SmCo magnets. The situation is changing, and in fact, SmCo magnets are becoming the preferred choice for some high-tech applications. Why? [1]

What makes them special

Is there any application where SmCo, which is much more expensive, performs better than NdFeB? NdFeB magnet is the strongest magnet in the world and if you don’t believe, check out this video: https://etn-demeter.eu/communications/outreach-communication/. Maximum energy product (BHmax) for NdFeB magnet is 200-440 kJ/m3, while for SmCo it is 120-260 kJ/m3. Although magnetic properties of NdFeB magnet are stronger, SmCo is still the second strongest, and SmCo possess even other properties which make it unique. To produce a SmCo permanent magnet, it is not Fe which produces the magnetic force, but ferromagnetic Co. Magnetized cobalt retains its magnetic properties even at temperatures up to 1,121 °C (Curie Point), which is higher than any other metal. This means that to demagnetize SmCo magnet you need to provide much more heat than in case of NdFeB. And that’s not all! SmCo magnets have higher resistance to demagnetization (coercivity), but they are also less reactive and less corrosive, so they don’t necessarily require a coating. A coating or plating protects the material and is required only when working in acidic, humid or vacuum environment. Based on the above reasons, one could deduce that SmCo magnets are excellent at high temperature applications, where NdFeB magnets are not stable enough. SmCo can resist both, high and cryogenic temperatures, including fast temperature changes, without losing its magnetic properties. The maximal operating temperature depends on the magnetic characteristics, as well as on the geometry of the system (the magnet and the circuit). The normal operating temperature range is from -300 °C to +550 °C. It is partially a matter of price, but there are indeed applications in which a high temperature stability of the magnet is needed, therefore SmCo magnets could gain traction in the automotive industry, spectroscopy, magnetic sensors, and other airspace and military applications [1-7].

To support the variety of industrial applications, different grades of SmCo magnets are available on the market. The term “grade”, in this case, is used just to find the balance between optimal cost, performance, and operational temperature resistance. It shouldn’t be confused with the kind of alloy. There are only two alloys which are important for permanent magnets, SmCo5 and Sm2Co17. The older version invented in 1970s is SmCo5, it has one Sm atom per five Co atoms. The more recent Sm2Co17 alloy has a higher energy density and a higher temperature operating point, which expands upon SmCo’s already vast range of applications. Sm2Co17 alloy may contain a mixture of Fe, Cu, Zr or Ti, which have an influence on the microstructure, magnetization, and coercivity of the magnet. Depending on the application, magnets are produced in various shapes like disc, cylinder, rectangular, ring or irregular shape (Figure 2). One of the leading European producers of permanent magnets is Magneti Ljubljana ., which produces sintered SmCo magnets. This company is involved in the DEMETER project, so all the processes developed by the researchers may be tested on the real magnet samples [3, 8, 9]. 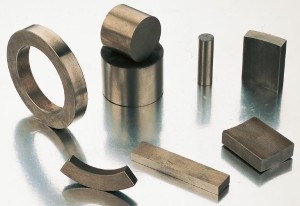 What’s behind the price

Forty years ago, , because the use of SmCo magnets was much higher. Today it’s just around 2-5% of permanent magnets in circulation. This is because SmCo was widely replaced by NdFeB magnets. Anyway, this is not the reason why SmCo magnets are not as widespread as before, but are designed rather for niche applications. The major component of SmCo magnets is cobalt, which represents 45-80% of the metal mass. In the 1980s, there was a large demand for Ni/Co rechargeable batteries and cobalt became quickly a critical metal due to its economic importance (Figure 3). SmCo magnets are now because of cobalt (the actual price for cobalt as on 9 January 2017 is 31,148.60 EUR/t). SmCo magnets are expected to be used more and more, especially as technology develops [6, 10, 11]. 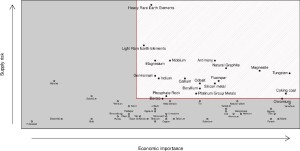 In the pursuit of environmentally friendly modes of transport, we turn to the hybrid and electric vehicles. But to source materials sustainably, it is necessary to stimulate considerable research and innovation in this area. Some developments and important steps have already been taken, but there are still many challenges in designing new alloys and coatings, recycling of magnets, separating and recovering valuable metals, designing electrical machine and assessing the life cycles of new recycling routes. And project DEMETER is making an effort to tackle these challenges.