On November 4th, the region of Auvergne-Rhone-Alpes organized it’s 3rd  edition of “Automotive Techdays” where 40 innovative projects were presented by 40 R+D Directors, European Market Directors, as well as some 150 VIPs. Because the automobile manufacturers are interested in electric traction motors, the research on motor generators is teeming. There is a description of 3 of the projects in the article in French here, written by Yvonnick Gazeau. But today we will just devote the blog to the one which is working on the elimination of rare earths in magnets—a similar project to DEMETER, ROMEO. Today, I will explain the strides that this research group is making to reach their goal of a rare-earth free magnet motor.

On eliminating rare earths in magnets

The prime objective of the ROMEO project is to reduce drastically the quantity of rare earths used in magnets. Neodymium, which is a light rare earth, does not pose a supply problem; however, dysprosium and terbium are heavy rare earths and are found mostly in China and Mongolia, who have seized more than 95% of the market. These elements are found in machines which are known for producing a strong electromagnetic induction, expressed in Tesla (T).

Jean-Marc Dubus, Director of Advanced Projects at Valeo, explains « If we would replace Neodymium which supplies 1,3 T by a ferrite supplying 0,45 T, there would be a risk of demagnetization, particularly in cold environments. So to maintain the same power, the motor would need to be 3 times longer and the amount of copper would also need to be increased. He adds, “Dysprosium alone accounts for half of the price of the magnet, thus, we’ve decreased it’s content to only 3.5% of the total mass.”

Thus, to find an effective replacement, the researchers of this ROMEO project studied the magnetic phases of the 20 cheapest materials in the world, this resulted in over 56,000 combinations! The production methods were also modified: a magnet without neodymium, for example, was covered with powdered HREEs, this produces a thermal shield which protects against demagnetization. 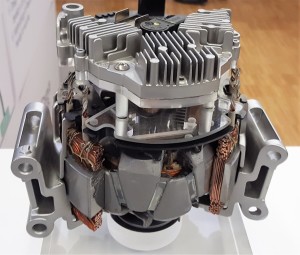 Magnets of an alternate start at Valeo

The next step is to go from a few milligrams on the laboratory scale to several tons on the industry scale to meet auto industry demand.  It is estimated that a hybrid electric vehicle contains 700 grams to 1 kgs of magnets. Jean-Marc Dubus: “The amount of rare earths could be reduced, but the cost of these magnets is not necessarily going to drop, because the manufacturing process has now changed and has become more complex.”

The recycling of the magnets from small machines is complicated and is not economically viable, but those coming from machines that weigh more than a kilo could be interesting. Jean-Marc Dubus: “In the framework of the European Training Network, and the European networks forming collaborations with Marie Curie-Sklowdska Actions, we have 15 doctoral students, in the DEMETER project, who work together on this problem, that is, defining the value chain for direct recycling for magnets or indirect recycling for the oxides. Direct recycling is done by blowing hydrogen onto a NdFeB magnet in an enclosed tank so that it is transformed into powder.” Other student groups are looking at redesigning the industrial disassembly process for the magnets. Please click here for more details.