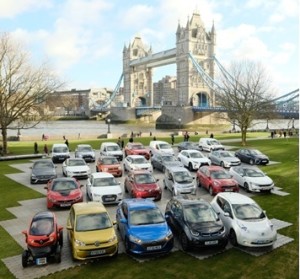 Author: Fernando Coelho
The automotive industry is one of the world’s largest industries. In 2015, United Kingdom (UK) had 36.5 million vehicles licensed for use on the road (300 million in Europe) and since 2012 the number of licensed vehicles has increased by an average of 650,000 a year [1]. The new generation of vehicles such as the Ultra-Low emission vehicle (ULEVs), have been developed and rapidly introduced into the market. It represents a huge potential for secondary source of Rare Earth Elements (REEs) in the future.

Last year in UK around 35.000 new ULEVs, which include hybrid electric vehicles (HEVs), plug-in hybrid electric vehicles (PHEVs), and electric vehicles (EVs) were registered for the first time [2]. Although there is no consensus regarding the number of ULVE we will have in the future, progress seems to be growing quickly. UK sales of ULEVs have been endorsed by the UK Government’s plug-in car grant, which gives buyers up to £4,500 to subsidise the purchase of electric and other low-emission cars. The British Government’s objective to reach by 2040 is that every new car sold in the UK will be a ULEV [3]. This is being facilitated through a range of measures including financial support to help consumers meet the upfront purchase costs of ULEVs, through the Plug-in Car Grant, and investment in a national charge point network. 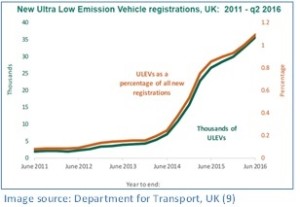 “Legislation will be introduced to ensure the United Kingdom remains a world leader in new industries, including electric cars” said the Queen in the new parliament’s speech on June 2017 [5].

With the increase of car on the roads, environmental issues such as waste generation and release of hazardous substances after processing end-of-life vehicle (ELV) have also become a problem. Currently, around one million of ELVs are generated each year in UK, 7-8 million in Europe and the introduction of the new generation vehicles represents new challenges for the recyclers as substances in the car have changed. Vehicle electrification has increased considerably the use of materials such as copper, dysprosium, lithium, manganese, neodymium, samarium, silver and terbium although the conventional treatment of ELVs are not designed to separate most of those strategic metals. 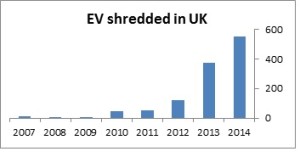 Moreover, end-of-life hybrid and electric vehicles can provide a new sources of critical materials. Most of HEVs contain 1-2 kg of REE in the permanent magnets in the motor. Permanent magnets are usually composed of neodymium-iron-boron (NdFeB) or samarium-cobalt (SmCo). Neodymium magnets are the strongest magnetic materials known and widely used due to high efficiency and suitability for lightweight applications. They contain around 30 wt% of neodymium, up to 10 wt% dysprosium.

Dismantling of electric motor for separation of the rare earth magnets can make this resource accessible for further recycling process. Although the majority of HEVs are still in use thus the number of HEV in end-of-life remains low but this number has increased each year.
In the future, it seems that recycling of REEs from the End-of-Life vehicle (ELV) will play an important and complementary role for the primary supply of REEs. Please, support our research by following us on Twitter, Facebook, Instagram or Linkedin. Or share the interesting blog content we are creating for you.
[1] Eurostat (2015). End-of-life vehicles: Reuse, recycling and recovery,
[2] https://www.smmt.co.uk/
[3] https://www.gov.uk/government/uploads/system/uploads/attachment_data/file/464763/uptake-of-ulev-uk.pdf
[4] https://www.gov.uk/government/uploads/system/uploads/attachment_data/file/575758/vehicle-licensing-july-to-september-2016.pdf
[5] https://www.gov.uk/government/speeches/queens-speech-2017