To develop innovative, environmentally-friendly direct and indirect recycling routes of NdFeB and SmCo magnets is one of the main objectives of DEMETER’s research program. Indirect recycling means that the magnet scrap is not used directly to produce new magnet alloys, but is separated and is chemically broken down to its element structural components (individual rare-earth elements). But what is the role of ionic liquids in this particular DEMETER project? 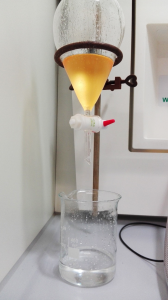 Prof. Dr. Koen Binnemans, the main coordinator of the project, has years of experience in chemistry of rare earths and critical metals, as well as in the development of ionic liquid technologies for their recovery [2].

Within the DEMETER project, indirect recycling of permanent magnets aims first to convert metals from their solid state to the solution by leaching in ionic liquids (ionometallurgy), and then to extract individual metals from the solution using solvent extraction with ionic liquids (solvometallurgy). Permanent magnets are a valuable secondary source of critical metals like cobalt and rare-earth elements (especially neodymium, dysprosium and samarium) [3]. Commercially, rare-earth metals are recovered by solvent extraction, but in this classic solvometallurgicial method, the environmentally unfriendly volatile solvents are used. Ionic liquids are a possible ‘green’ alternative for the volatile solvents. This is because of the strong ionic interaction within the ionic liquid results in a negligible vapor pressure, a non-flammable substance and in a thermally, mechanically as well as electrochemically stable product. No less important is the fact that in processes we develop, we are going to reuse the ionic liquids, so less chemicals will be spent. Mentioned properties like non-volatility, non-flammability and reusability of ionic liquids makes the recycling process environmentally preferable [4].

Recently I attended a very interesting workshop about ionic liquids called COST EXIL MC which took place 18th – 20th April 2016 in Poland. It was a nice experience and opportunity to learn more about the latest scientific findings and see several different applications of ionic liquids [5].

Is the indirect recycling route for permanent magnets really eco-efficient? To answer this question, one must research intensively, and many ‘small’ things need to be considered. However, working with reusable chemicals in a closed loop is already a good sign. Ionic liquids open up new possibilities and I am happy to start researching critical metals recovery from secondary sources with the innovative recycling schemes.