Report from the 20 Years of Marie Skłodowska Curie Actions

We are in the baroque-decorated theatre of a 4 stars hotel in Brussels, the capital of Belgium and of the European Union, to participate in a unique event: the 20th anniversary of the Marie Skłodowska Curie Actions, MSCA! The light in the parterre is low, all the attention is focused on the bright stage. Several brilliant speakers one after the other share their experience in the 10-minute TED-talk style presentation. However, the show is not limited to the stage, but also spreads to the audience sitting in the parterre! The audience takes part in the discussion and interacts a lot by bringing interesting suggestions and discussion points. For instance a Greek women, “baptised” by the moderator as the “the red lady” (for her dress) asked many interesting questions. If you want to have an idea about her points on the event, you can follow her on Twitter: https://twitter.com/_InnovationGR.

The topics and their presenters are very diverse. There is Nadine, a young girl in black dress from the Lebanese American University, speaking about comfort food and stress. She concluds by summarising her thesis: “Little, sustainable changes in your lifestyle will decrease your need for unhealthy food and help deal with stress”. Christian Neyser is an expert in Neuroscience, from the Institute of Neuroscience of the Netherlands, and he explores what makes us emphatic: “We recruit our own emotions when we are empathic with somebody else”. He also concludes with an important message: “thanks the @EU_Commission for striving to create a peaceful environment that allows science to thrive”. Elizabeth Evenden, a researcher from the Brunel University in UK, studies the connections between texts and images and our feelings. She launches a hashtag #StopFundingHate (twitter account @codexhistoria) and concludes with the following question: “What are the reasons we have stereotyping today?”. Francesco Ometto, working with Scandinavian biogas, takes the stage to look for funding for his innovative idea, producing biogas from the macroalgae and minimizing at the same time eutrophication: “Converting waste nutrients into energy boosts sustainable development, sustainable energy and green economy”. Veronika Stolbova, a blond energic girl from the University of Zurich, studies how to forecast monsoon: “It should be a combined effort of researchers and policy makers to improve the monsoon forecast”. Agota Mockuté is a sweet very young girl from University of Florence, who speaks about wind turbines, and reveals to us an important secret: “Wind turbines are responsible only for the 5% of birds’ death all over the world”. Marleen de Kramer is completing  her 2nd MSC fellowship and she brings on the stage an outreach demonstration, NIGHT. She has just developed a mobile app for archaeological objects using augmented reality: Asinou Media APP. The best compliment she has ever received? While at a demonstration for kids and young adults in a shopping mall, she received what she considers a very high complement.  One boy cried, “Mummy! Do you see? I told you I can be a nerd when I grow up…exactly like her!”. Shubhanshu Tiwari (https://twitter.com/his_shubhness ), from the GraWiTon – Gran Sasso Science Institute, gives us a musical interlude reproducing the sounds collected from…black holes!!! The video has been posted by @MSCActions, https://twitter.com/MSCActions. Finally, Xoana Troncoso is a friendly passionate scientist that focuses on the parallel between image and perception by our brains and on science communication, especially towards young generations: “Scientific communication is not a side part of research and it is thanks to Marie-Curie that we have embraced this notion”. She shows us a card that she received from a high-school student in a hospital, whose class she visited. He wrote her to thank her talk and that it gave him solace that he can still express his ideas even if he cannot talk.

Despite the diverse testimony by the medley of speakers, something connects them beside their passion for research and communication: MULTIDISCIPLINARITY.  Nowadays, a scientist cannot cling anymore to just one branch but he or she has to be fluid. One must be able to pass, more or less, easily from one field to another. A significant example in this sense is the story of Xoana, that graduated as a physicist and is at her 2nd MSC fellowship, this time in neuroscience. The skill of being a jack-of-all-trades, or a “Renaissance Man” recalls the time when scientists dealt with different scientific fields at the same time and were also philosophers and humanists. A brilliant example in this sense is Leonardo da Vinci: he was a painter, philosopher, inventor and scientist.  Of course, we are not all expected to be as genius as Leonardo da Vinci, who propitiated many modern inventions, but we should be expected to be flexible and mobile enough, not only physically but also mentally, if we wish to be scientists and good scientists.

Mobility is also one of the key-points at the round table “Where should we head for the future?”. On the stage, coordinated by the welcoming smile of Julie Gould, there are Orla Feely, Chair of the MSC Advisory Group, Janet Metcalfe, VITAE, Yoran Beldengrün (https://twitter.com/yoranbeldengrun ), MSCA fellow and Founding President of Scientists Dating Forum, and prof. Alvo Aabloo, MSCA coordinator from University of Tartu. They highlight the impact that MSCA has had to spread the ideas of mobility and gender balance. An older professor from the audience asks: “Is physical mobility necessary in the internet age?” Prof. Aabloo replies: “There’s a key fact: sometimes you have to be physically part of a group”. Janet adds: “There are benefits of living in a new country, but especially for women it means compromises. We have to support them in this delicate work-life balance.” Yoran, the youngest on the stage, talks about internet: “One of the problem is net and connecting. By publishing online, we have pros and cons: it’s more interactive but we don’t have any longer a paper in our hands, so do we recognize the value of it?”. Prof. Aabloo asks back some typical questions that his students have posed to him: “Why should a young person as me choose a PhD? What will make me decide to have fun for 3-4 years in an office or a lab, staying quite away from society?”

Shane Bergins (https://twitter.com/shanedbergin ) throws in the hardest challenge: “How do you consider professionalization?”  There is a little bit of resistance in considering the PhD not just as a student: what is required is a competitive framework to make the researchers feel more like professionals, to develop their entrepreneurship. Shane is also author of the Declaration of Young Researchers, or #BratislavaDeclaration. He has a strong vision of the <<United States of Europe>> and strongly believe in a common participation to defend them and the status of young researchers: “Great ideas are divorced of age.”. Again, is Einstein and the fact that he was just 26 when he came to his most important discoveries a good example for this? Shane continues: “We live in a European Union that is in need of ideas in many areas. Could you imagine now a common declaration that trans-goes the personal interest of each countries?  We feel privileged in being European followers but we have to protect this status to make ourselves the best research group in the world. A balance between conservativism and optimism is necessary.”

It’s time now for a video-message from Jerzy Buzek, Chair of ITRE Committee. His words move everyone in the audience : “”When I was a young scholar I could only dream of the kind of support that #MSCA provides.” And again: “Science is both a mission and a responsibility and its first mission is to guarantee human benefits”.

The day is almost at its end, but a very important person is now on the stage: Tibor Navracsics, Commissioner of Education, Culture, Youth and Sport. He considers the MSCA a “benchmark” for regions and states to attract and retain top researchers. He also promotes the concept of gender balance to ensure excellence in both academia and industry. He reflects back on the importance of entrepreneurship and says: “Connections between education, business and research are vital to making real progress”.

Now, it’s really the end of the day. It has been more than a pleasure to be part of such an event and to listen brilliant researchers and eminent people talk about the past, the present and the future of European research. However, all good celebrations involve cake! And with this we leave you some celebratory photos : 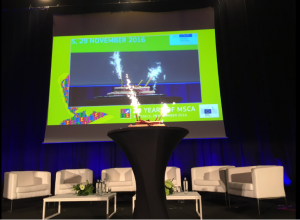 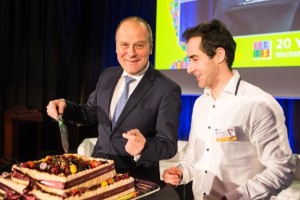 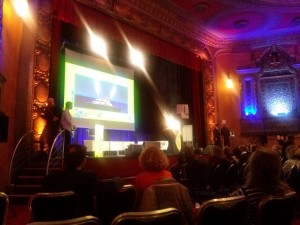