An introduction of rare-earth nitride magnets

The magnetic states of most rare-earth monopnictides have been known for decades; many of these studies were completed in the 1960s. The heavier pnictides were found to be antiferromagnetic, in contrast almost all the nitrides are ferromagnetic. The current interest in the potential of spintronic devices has raised the level of urgency in the exploration of intrinsic ferromagnetic semiconductors, of which the rare-earth nitrides offer a rich set of examples. Yet their potential has not been explored until recently, despite the fact that europium oxide (EuO) was a well-known intrinsic magnetic semiconductor [1]. Unlike the dilute magnetic semiconductors, the rare-earth nitrides do not rely on the presence of foreign ions, nor on a huge hole concentration that prevents independent doping control. Thus these nitrides allow for controlled doping independent of the ferromagnetism opening new possibilities for spintronic devices and fundamental spin-transport research. The rare-earth nitrides show promise in diverse applications such as spintronics, infrared detectors, and as contacts to III-V compounds. Today, about a dozen laboratories worldwide report the growth and study of rare-earth nitride thin films.
As hard permanent magnets are so important in many fields, much efforts has been made to find superior magnetic materials. As [2] suggests that interstitial modification of Nd2Fe14B using nitrogen results in an increase in Curie temperature (Tc) of 60 K, with a reduction in saturation magnetization (Ms) and anisotropy field, or other studies even have shown that nitrogenation leads directly to the decomposition [3, 4]. So nitrogenation of Nd2Fe14B fails to enhance its magnetic properties. Many rare-earth compounds such as R2(Fe, M)17，R(Fe, M)12 and R3(Fe, M)29 have received much attention [5]. As an interstial impurity, nitrogen tends to dilate the host lattice. In magnetism, most of the interest is focused on iron and iron-based alloys because these materials are the most practically and commonly used. Iron has the highest ferromagnetic polarization at room temperature and it is by far the cheapest magnetic element. So the research of nitrogenation effect mainly focused on R2Fe17N3-x (2:17, R = rare-earth element) [6, 7] and RFe12-xMxN (1:12, R= rare-earth element, and M = Mo, Ti and V) [8-10] rare-earth/iron compounds, which reveal that interstial nitrogen dissolution indeed enhance µ0Ha, µ0MS and Tc. These nitrides exhibit high intrinsic magnetic properties which are comparable with those of Nd2Fe14B, or even better in terms of Curie temperature [11] and the anti-corrosion ability [12]. The average increase in Tc caused by introducing nitrogen into RFe12-xMxN is ~ 200 K [13] which is desirable for the applications of these magnets in high temperature environments. 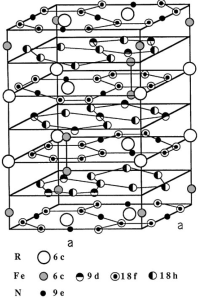 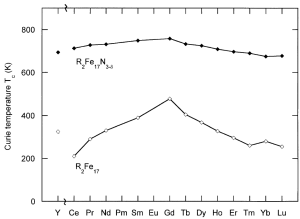 For the ThMn12 type, nitrogen locates on similar octahedral interstitial sites to those in Sm2Fe17 (figure 1), with a theoretical maximum concentration of I atom per formula unit. Volume expansions of 2-4% have been measured, lower than those for R2Fe17N3-x, but the Curie temperatures of Ti-stabilized compounds are similar (740 K for Sm(Fe11Ti)Nx)). Mo-stabilized compounds have generally lower Curie temperatures, in the range 480-700 K. A low R:Fe ratio and good properties for more abundant rare-earths Nd and Pr make the RFe12-xMxNy compounds attractive as permanent magnet materials. Among these RFe12-xMxN alloys, NdFe12-xMxNy and PrFe12-xMxNy magnets show higher saturation magnetization [10, 11]. Furthermore, the relative content of rare-earth element Nd in NdFe12-xMxN (~ 7.6 at.%) is much lower compared to other rare-earth permanent magnets such as R2Fe17N3 and Nd2Fe14B (~ 12.5 at.%) magnets. However, RFe12 compounds are unstable which can only be obtained by replacing Fe with a third element M (M = Mo, Ti and V). As a consequence, µ0MS of NdFe12-xMxN compounds is lower than that of Nd2Fe14B, due to the substittution of a non-magnetic element for Fe to stablize the ThMn12 structure. For example, M. Akayama [16] and S. Suzuki [17] reported that µ0MS of NdFe11TiN and NdFe7Co3TiN1.3 is, respectively, 1.48 T and 1.50 T, which are lower than that of Nd2Fe14B (1.60 T). So, if x in NdFe12-xMxN compounds can be reduced, strong magnetization will be achieved which has been approved by T. Miyake et al [18] theoretically via first-principles study. Although the pure NdFe12 phase is unstable, recently, Hirayama et al [19, 20]. obtained the NdFe12Nx phase via co-sputtering of Nd and Fe on textured tungsten (110) substrates and subsequent annealing in nitrogen atmosphere. The excellent intrinsic hard magnetic properties of µ0MS ≈ 1.66 ± 0.008 T, µ0Ha ≈ 8 T and Tc ≈ 550 ℃ are superior to those of Nd2Fe14B.
Generally, processing of nitride magnets includes two parts, production of metallic phases and nitrogenation. Take Sm-Fe-N materials for example. The precursor Sm2Fe17 ingot material can be produced by arc-melting or induction melting, or by calciothermic reduction, in which Sm2O3, Fe and Ca powders are mixed, then heated at 1300 K to produce Sm2Fe17 and CaO, which is washed away with water. Calciothermic reduction typically introduces an oxygen impurity (<0.13 wt%) [21]. It is quite important to point out that the elimination of SmFe3 and αFe is essential as SmFe3 decomposes to SmN and αFe during nitriding, and the presence of αFe provides nucleation sites for magnetization reversal in small fields. The commonly used way to remove SmFe3 and αFe is to add 2 at.% of a IVB, VB or VIB element, or adding 4-5 at.% of Nb or Ta prevents primary crystallization of Fe, although a paramagnetic Laves phase is formed. Another technique used to produce Sm2Fe17 is mechanical alloying, in which elemental Sm and Fe are milled together in a high energy ball milling and melt-spinning [22].
Nitrogenation of Sm2Fe17 powder is relatively simple: sufficiently small size of powder particles exposure to N2 gas at a pressure of ~100kPa, at temperatures in the range 620-770 K, leading to nearly complete nitrogenation within one to several hours according to the reaction:
2〖Sm〗_2 〖Fe〗_17+(3-x) N_2→2〖Sm〗_2 〖Fe〗_17 N_(3-x) (1)
Nitrogenation does not occur within a reasonable time at temperatures below 620 K, and at temperatures in excess of 720 K disproportionation occurs according to the reaction:
〖Sm〗_2 〖Fe〗_17 N_3 →2SmN+〖Fe〗_4 N+13Fe (2)

The nitrogenation process is irreversible, so once Sm2Fe17N3-x is formed, it is not possible to pump out the N atom under vacuum on the same time scale as for nitrogenation. A deeper understanding of the nitrogenation process is important as the nitrogen content and the homogeneity of nitrogenation have a major influence on the magnetic properties of Sm2Fe17N3-x. In particular, the presence of incompletely nitrided particles, with a soft magnetic Sm2Fe17 core is highly detrimental to the coercivity. The mechanism of nitrogen diffusion has been considered in detail by Coey and Skomski [23, 24] who proposed a mechanism of free diffusion in a gas-solid solution, and by Zhang and co-workers [25, 26] who have put forward a model of trapping diffusion, or chemical reaction diffusion. Essentially, the difference between the two models is that in the free diffusion model, diffusion occurs via the energetically unfavorable 18g sites and an N atom falling onto a 9e site is chemically bound and therefore and immobilized. Many experimental data for Sm2Fe17N3-x favor free diffusion of N atoms in a gas-solid solution at typical nitrogenation temperatures (620-770 K). nitrogenation is also made easier by using nitrogen at high pressure [27] or by the use of H2 in a mixture with N2, or in the form of NH3. The effect of using NH3 is to vastly increase the effective nitrogen pressure [23]. Usually it is vital to avoid the presence of the soft magnetic phases Sm2Fe17 (due to incomplete nitrogenation) or αFe (due to nitriding for too long, allowing disproportionation). This necessitates a small particles size, which is typically achieved by ball milling or jet milling ingot material to an average particle size of 10-50 µm with possible hydrogen pretreatment.