The Paris motor show is the oldest vehicle exhibition in the world. It has been an important wind vane for automotive industry since 1898. This year, many automotive companies displayed their new models and technologies as usual. But an obvious difference is that the electrical vehicles, which have traditionally taken on only a supporting role for previous shows, has escalated to lead player. This blog briefly outlines some key features of the electrical powertrain system seen at this motor show, with a focus on electrical machines.

The most common hybrid configuration is the belt drive system. The basic configuration comprises of an alternator, a belt convey system and a battery. Traditionally, the alternator is a device which provides electricity to the vehicle. But with appropriate upgrade, the alternator can also be used as a starter to help internal combustion engine (ICE) easily start or stop (For more details about alternator&starter, please check the previous blog “How many electric motors are in a Car ?”). The belt system is used for the torque transmission from engine to alternator or vice versa. It provides proper tension and helps to reduce the vibration. The battery voltages are usually around 12V or 24V. It is used as a buffer to balance the generated electricity and demand electricity.  Figure 1 shows a belt drive system on a Peugeot combustion engine. Figure 2 shows the alternator that is integrated within this belt drive system. For many years this configuration has been the standard for majority of combustion cars. Therefore, technically speaking, most of the vehicles have hybrid driving capacity.

However, with stricter emission standard (The Paris Agreement)[1], as well as increasing electricity consumption per car, micro hybrid system seems not enough to fulfill the requirements. Therefore we need  a more electric hybrid. 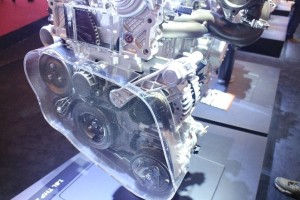 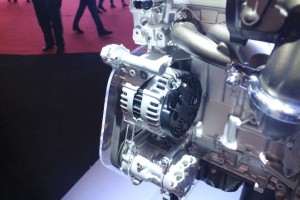 Mild hybrid could be the most practical approach to reach emission reduction targets in the next 5 to 10 years [2], due to their low costs and environmental benefit (CO2 reduction). When applying the mild hybrid concept, normally 10 kW to 15 kW will be required. Compared to the micro hybrid system, the configuration has no obvious change. Thus the system upgrade is easier compared to heavy hybrid or pure electrical system. However, every electrical component is scaled up. For instance, in Figure 3, the voltage of the battery is 48V. Figure 4 shows a 10 kW motor/generator used in this 48V medium hybrid system. Sometimes, to accomplish better power boost, an electrical turbine charger must be applied to the ICE, such as the Audi SQ7 powertrain configuration.

But bear in mind that the main idea of mild hybrid is still to serve for ICE. In other words, the operation of the motor as well as e-turbine charger enables the ICE to run in the most efficient zone. This is the essential difference between mild hybrid and heavy hybrid, where for some heavy hybrid systems, the ICE becomes a support role to serve electrical powertrain and to work as a back-up to extend mileage. 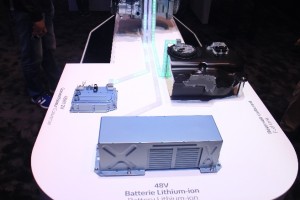 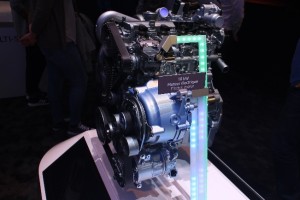 When speaking of heavy hybrid or plug-in configurations, we are referring to large scale systems. Every electrical component is further scaled up. The voltage of battery is always above 100 V.  Thus, instead of simply using belt drive system for micro and mild hybrids, here the integration of electrical system can be diverse and complicated. 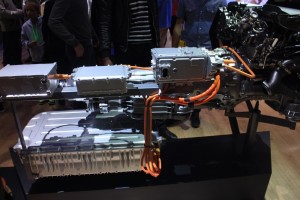 To further compensate the gearbox , the motor/generator can be directly attached on the gearbox [3].

Furthermore a motor can directly control the rear wheel, but front wheel is still driven by combustion machine, as Figure 6 shows. In this way, it is possible that the car is only driven by rear wheel motor, just like a pure electrical vehicle.

Other than the voltage of the battery increase to 400V, one of the largest differences compared to a mild hybrid battery is cost. The cost of the electrical powertrain is drastically more expensive–not only due to the increased capacity–but also the additional cost of related battery management system, insulation materials and safety interlock. 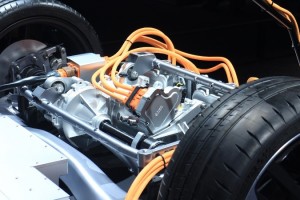 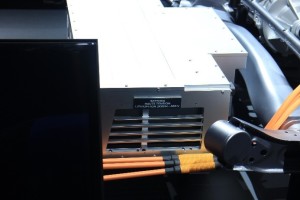 Similar configuration can also be found in the Mitsubishi hybrid powertrain, as Figure 8 shows.  There are three electrical machines used in the powertrain, thus the engine plays the supporting role. At low speed, the engine and generator function as a small power plant to recharge the battery. Only at high speeds does the engine get involved in giving power to wheels. In addition, a big drive control unit is placed beside the rear motor.

For this configuration, the car will gain incredible performance. But considering three motors/generator and one powerful battery, as well as an ICE, the cost may be even higher than the same level performance of pure electrical vehicles. 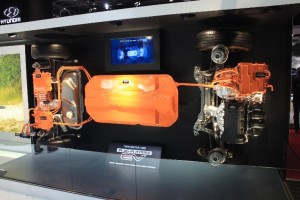 The mainstream solution is to make small and lightweight vehicles that focus only on urban transport.  The cars shown in Figure 9 and Figure 10 are representative products on the market.

It is worth mentioning that the Zoe Z.E.40 is the upgraded version and not yet commercially available. The battery capacity has been increased to 41kWh, which results in a recharge mileage of up to 400 km. Zoe is the best-selling EV in the European market in 2015, the quantity of vehicle sales is 18500, covering 48.1% of the French electrical automotive market [4]. 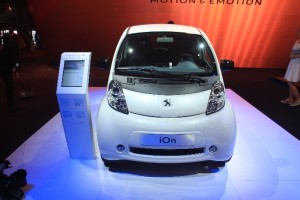 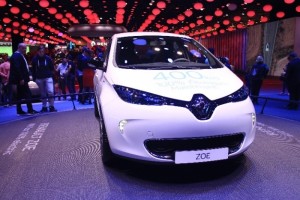 Figure 11 shows the pure electrical powertrain of Renault. It can be observed that the motor works directly with a small gearbox to drive the wheels. The Zoe contains a synchronous winding field motor to drive the car, and has no rare earth magnet in the rotor. Mainstream traction motors used for electrical and hybrid vehicles are still permanent magnet-containing motors. This may be due to the high cost of raw materials and high speed limit. 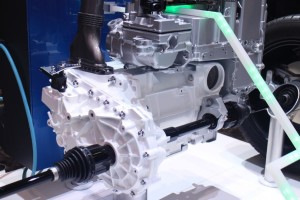 While on the topic of pure electrical vehicles, it is impossible not to mention Tesla. Even if Tesla did not unveil any new technology, their booth is one of the most popular places for visitors.

Compared to most pure electrical vehicles used for city transport, Tesla’s market approach is focused a lot more on luxury. Thus, cost is not a serious consideration. Tesla target demographic can afford large dividends and therefore prefer to buy vehicles with bigger, more expensive batteries to increase the  recharge mileage. For the Tesla Model S, the battery capacity can go up to 85 kWh. Ironically, as Tesla has acquired more and more advanced battery technology, their battery cost is lowering compared to . This is also the key force to push the pure electrical vehicles development.

Tesla uses induction motors instead of PM motors as traction power. Although induction motors have lower efficiency than PM motors, the low raw material price can compensate this shortcoming. In fact, there are many arguments about who is the winner of traction motor, induction or PM? But it seems that they always tie after measuring all the performances and system level cost (Please see the previous blog by Amit) [5]. 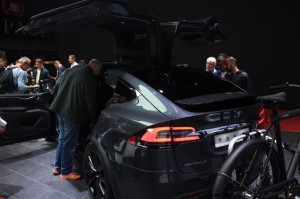 In the next blog I will present the specific motor techniques and the future trend of electrical vehicles on the Paris motor show, so stay tuned.

The author has copyright of all the photos.