When BMW AG revealed it was designing electric versions of its X3 SUV and Mini, the going rate for 21 kilograms of cobalt—the amount of the metal needed to power typical car batteries—was under $600.Only 16 months later, the price tag is approaching $1,700 and climbing by the day.

For carmakers vying to fill their fleets with electric vehicles, the spike has been a rude awakening as to how much their success is riding on the scarce silvery-blue mineral found predominantly in one of the world’s most corrupt and underdeveloped countries.

Cobalt prices stage one of the biggest jumps among commodities

“It’s gotten more hectic over the past year,” said Markus Duesmann, BMW’s head of procurement, who’s responsible for securing raw materials used in lithium-ion batteries, such as cobalt, manganese and nickel. “We need to keep a close eye, especially on lithium and cobalt, because of the danger of supply scarcity.”

Like its competitors, BMW is angling for the lead in the biggest revolution in automobile transport since the invention of the internal combustion engine, with plans for 12 battery-powered models by 2025. What executives such as Duesmann hadn’t envisioned even two years ago, though, was that they’d suddenly need to become experts in metals prospecting.

Automakers are ﬁnding themselves in unfamiliar—and uncomfortable—terrain, where miners such as Glencore Plc and China Molybdenum Co. for the ﬁrst time have all the bargaining power to dictate supplies.

“They’re a lot bigger—but the reality is guys like us are holding all the cards,” said Trent Mell, chief executive ofﬁcer of First Cobalt Corp., which is mining the mineral in northern Ontario and setting up talks with automakers seeking long-term supplies.

Complicating the process is the fact that the cobalt trail inevitably leads to the Democratic Republic of the Congo, where corruption is entrenched in everyday business practices. The U.S. last month slapped sanctions on Glencore’s long-time partner in Congo, Israeli billionaire Dan Gertler, saying he used his close ties to Congolese President Joseph Kabila to secure mining deals.There’s also another ethical obstacle to negotiate. The African nation produces more than 60 percent of the world’s cobalt, a fifth of which is drawn out by artisanal miners who work with their hands — some of whom are children. The country is also planning to double its tax on the metal. 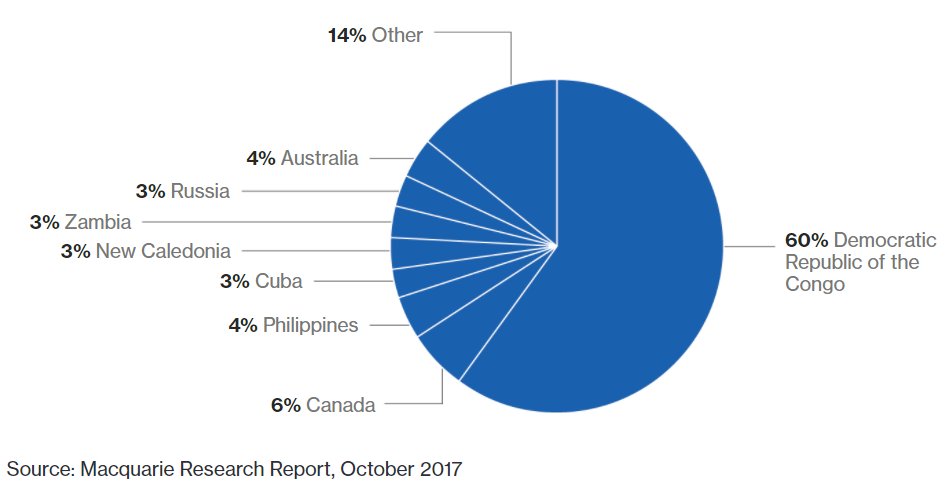 Automakers may not have the luxury of choice as countries across the world ban gas and diesel engines to slash carbon emissions.If each of the billion cars on the road were replaced today with a Tesla Model X, 14 million tonnes of cobalt would be needed—twice global reserves. Even a more realistic scenario for people to drive 30 million electric cars by 2030 requires output to be more than trebled, according to a study commissioned by Glencore from commodity analysts CRU Group.

The projections have made the lustrous metal, a byproduct of copper and nickel mining, into one of the most coveted commodities. Its price surged 128 percent in the past 12 months, in part because hedge funds including Swiss-based Pala Investments stockpiled thousands of tonnes of the stuff, which is used to power everything from mobile phones to home electronics.

“There just isn’t enough cobalt to go around,” said George Heppel, a consultant at CRU. “The auto companies that’ll be the most successful in maintaining long-term stability in terms of raw materials will be the ones that purchase the cobalt and then supply that to their battery manufacturer.”

To adjust to the new reality, some carmakers are recruiting geologists to learn more about the minerals that may someday be as important to transport as oil is now. Tesla Inc. just hired an engineer who supervised a nickel-cobalt reﬁnery in New Caledonia for Vale SA to help with procurement.

But after decades of dictating terms with suppliers of traditional engine parts, the industry is proving ill-prepared to confront what billionaire mining investor Robert Friedland dubbed “the revenge of the miner.”

As electric car production takes off, cobalt supplies are projected to fall short of demand 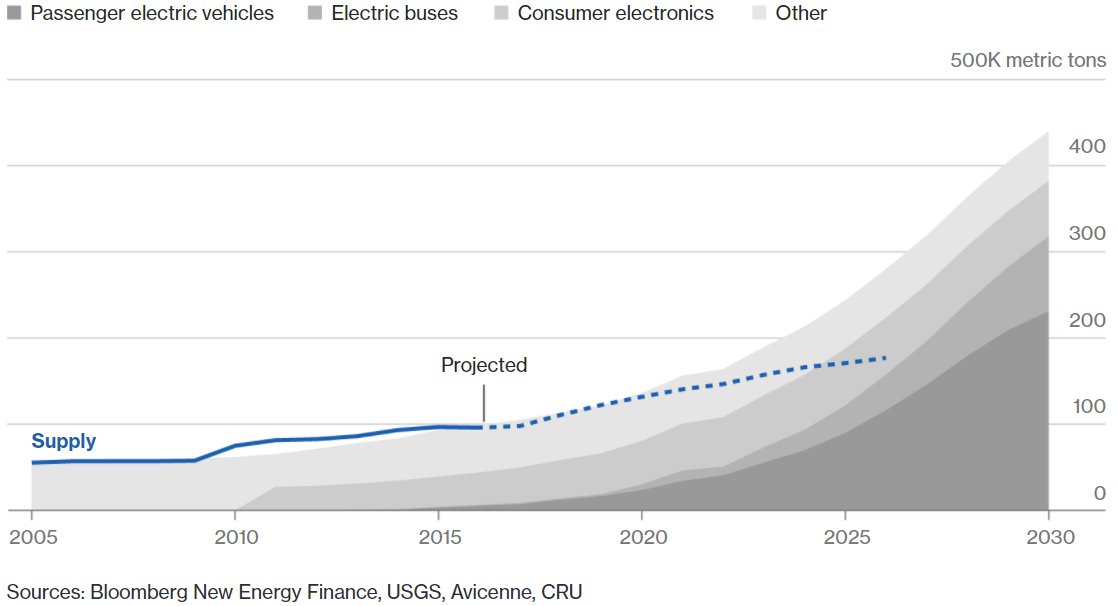 Take Volkswagen AG. The world’s biggest automaker has one of the industry’s most ambitious targets for battery car sales. Cobalt producers spurned its attempt in September to get long-term cobalt supplies at prices ﬁxed well below market rates. Two months later, Volkswagen wooed them to meetings at its 30,000-seat stadium in the German city of Wolfsburg, hosting each in a separate hospitality box.The carmaker has eased its price demands and may succeed in securing cobalt supplies this year, according to people familiar with the talks.

Duesmann said BMW is willing to pay upfront for a medium-term supply deal, one step short of taking stakes in miners. It’s also sending teams from its procurement and supply-chain sustainability departments to Congo this month, the third trip in a year. Aside from visiting big producers, they’ll explore the possibility of sourcing cobalt from artisanal mines.

“There will be a shortage of supply of cobalt going forward as and when the electric vehicle story unfolds” predicted Ivan Glasenberg, chief executive ofﬁcer of Glencore, which is in talks with Volkswagen, Tesla, Apple Inc. and various battery makers.Even if carmakers manage to lock in orders, there’s another major cobalt player to contend with: China. Seven of the 10 largest producers in Congo as of 2016 were Chinese-owned, and the Chinese State Reserve Bureau stockpiles the mineral. Most cobalt mined in Congo, meanwhile, is puriﬁed at reﬁners in China before it can be used by battery makers such as Panasonic Corp.

“There is concern at the far end of the supply chain about the raw material issues,” said Sam Riggall, chief executive ofﬁcer of Clean TeQ Holdings Ltd., developer of the Sunrise cobalt and nickel project in the Australian state New South Wales. He’s already signed a supply deal with Beijing Easpring Material Technology Co., which makes cathodes (the positive end of a battery). Carmakers are also knocking on his door from Asia, Europe and North America.

Also getting inundated with calls is Vladimir Potanin, chairman of MMC Norilsk Nickel PJSC, which produces the most nickel in the world, as well as cobalt at plants in and around the Arctic Circle.

“Carmakers are open to different forms of cooperation,” including long-term contracts, streaming deals and joint ventures, Potanin said in an interview. “We are in talks now over those projects. But for us it’s not clear how deep we need to go.”

If history is a guide, the cobalt mania won’t last. In the early 2000s, palladium, used in catalytic converters that remove pollution from vehicle exhaust, tripled in two years on supply concerns. Carmakers eventually found ways to use less of the metal, and demand slid by a third. Ford Motor Co. was forced to write off $1 billion when its stockpile of the metal fell in value.

Carmakers expect to gradually move to batteries that use less cobalt 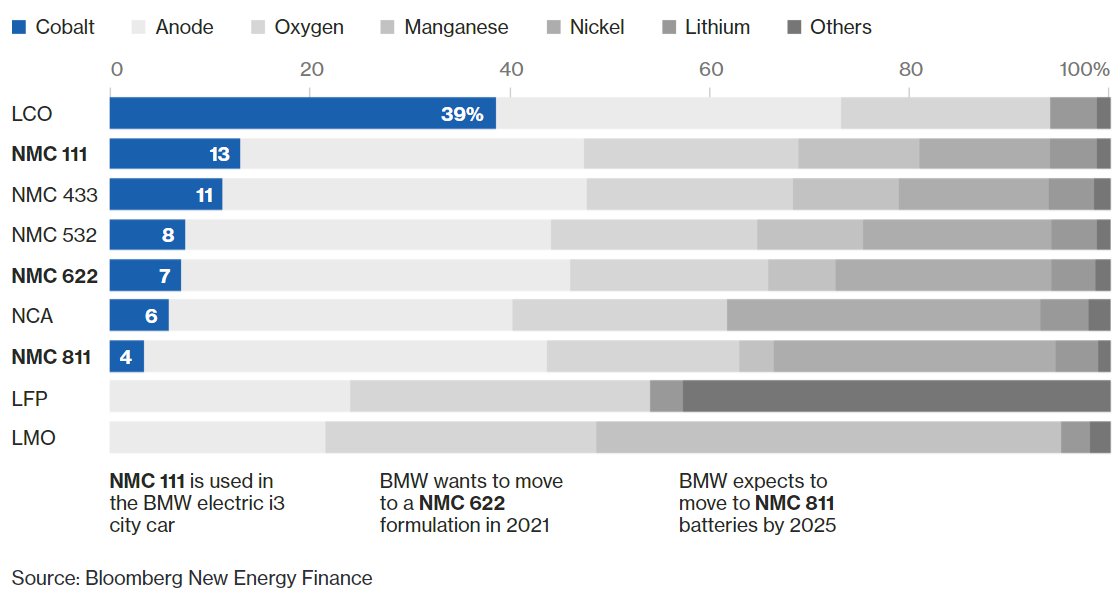 Car-battery chemistries may follow a similar trajectory. Currently, most contain roughly equal amounts of nickel, manganese and cobalt, called NMC 111. By 2025 the dominant composition will be 80 percent nickel and 10 percent cobalt, according to UBS AG forecasts.

With so much on the line, BMW’s Duesmann, a mechanical engineer who helped develop the electric i3 city car, isn’t putting too much weight on these innovations just yet. Last month, BMW revealed its dedication to an electric future by brieﬂy lighting up its Munich headquarters, modelled in the 1970s after the four cylinders of an engine, to look like batteries instead.

“There’s going to be a supply shortage, so right now the suppliers have the upper hand,” he said.