The Dutch Journalist Rijkert Knoppers interviewed a number of stakeholders with respect to their view on the Critical Raw Materials list of the European Commission, which was launched in 2017 and provides an update of previous lists published in 2010 and 2014.

Critical raw materials (CRMs) are defined as those materials which have a high economic importance and simultaneously suffer from a high supply risk, due to production monopolies and/or political instabilities. The article investigates which solutions can be presented with respect to the criticality issue.

SIM² KU Leuven coordinator, Peter Tom Jones, along with colleagues from TU Delft and the Fraunhofer Institute for Mechanics of Materials (IWM), provide their views on this question, covering the topics of recycling and substitution.

Jones refers to the first recyclable rare-earth-based e-motor that was developed in the context of the EU DEMETER project. DEMETER is a EU Horizon 2020 European Training Network project that started in 2015 and which targeted the “Design and Recycling of Rare-Earth Permanent Magnet Motors and Generators in Hybrid and Full Electric Vehicles”.

More info about the DEMETER e-motor, and its developers, can be found in the new DEMETER video. The video demonstrates the DEMETER e-motor, the first fully recyclable e-motor (for a hybrid electric vehicle) based on recycled NdFeB magnets. Featuring two of the DEMETER Researchers, Pranshu Upadhayay (Valeo) and Gwendolyn Bailey (KU Leuven), the video highlights the e-motor’s environmental benefits with respect to traditional, fossil fuel-driven ICEVs (Internal Combustion Engine Vehicles).

You can download the full article in MM Milieumagazine (which is written in Dutch) here. 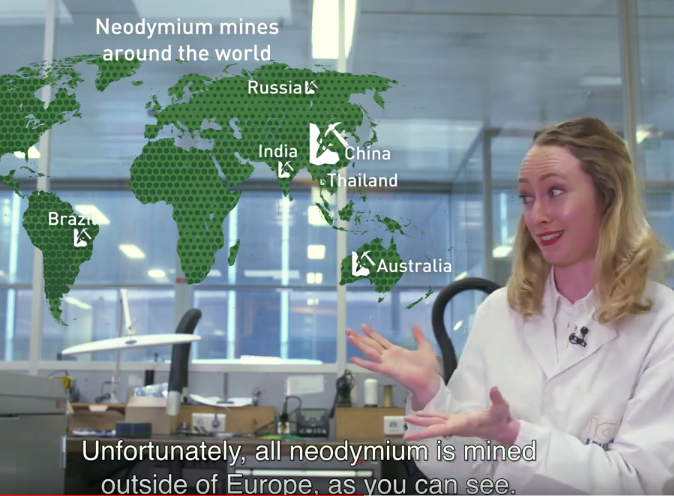